Running for the needy Students

In the early hours of the morning, Kabarak University was a hive of activities. One by one participant’s walked in and a few sponsors could be spotted trying to put their final touches to what was going to be one of the most colorful events in the University.

The event which was dubbed “Running for a needy student” stretched from Mogotio Equator all the way to Kabarak University meeting the requirements of 21KM.

Featured were both promising and established athletes in the country and one could not fail to notice the joy one Valerie Jemeli Ayabei had after crossing the finish line in exactly 1hour 11 minutes and 15 seconds.

The 27 year old for the second time in a row emerged winner of the 21KM women race followed by Lydia Njeri who came in second at 1h17M 15s and Lydia Simiyu third in 1h18m10s.

The men were much faster in the 21KM category where we had the winner Leonard Barsoton crossing the line in exactly 1.05.26 followed by Ezra Sang and Phens Kipleting.

In the 10KM women race Deborah Samum finished first at 36.20 where the subsequent two Stella Chepkosgei and Lillian Chebii finished at intervals of 10 Seconds apart.

In the Corporate Category, various organizations participated and the winning teams were awarded where Kabarak University Enterprise took up first position followed by the Kenya Power and Lighting Company and third was the famous Lake Bogoria Spa and Resort.

The event came to an end with a speech from the University Vice Chancellor Prof. Henry Kiplangat who lauded all the participants for being part of the charity event. He noted that the support would go a long way in supporting the needy students who were enrolled in the institution and were at risk of deferring their studies for lack of fees.

Prof. Kiplangat further read a speech on behalf of the Hon. Senator Gideon Moi ( Pro Chancellor of the University who in his speech called upon stakeholders to come up with Policies that will ensure that every student no matter where they came are accorded equal opportunities and platforms to pursue and realize their dreams.

In closing, the Pro-chancellor urged the Government to enhance funding channeled for HELB to ensure that the funds reach a wider range of students in various institutions which will in return enable the Government to progressively develop the needed Human resource to push the Government’s Big Four agenda and also realize the vision 2030 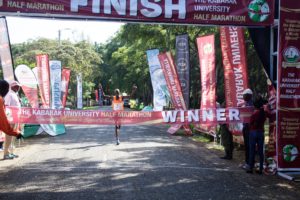