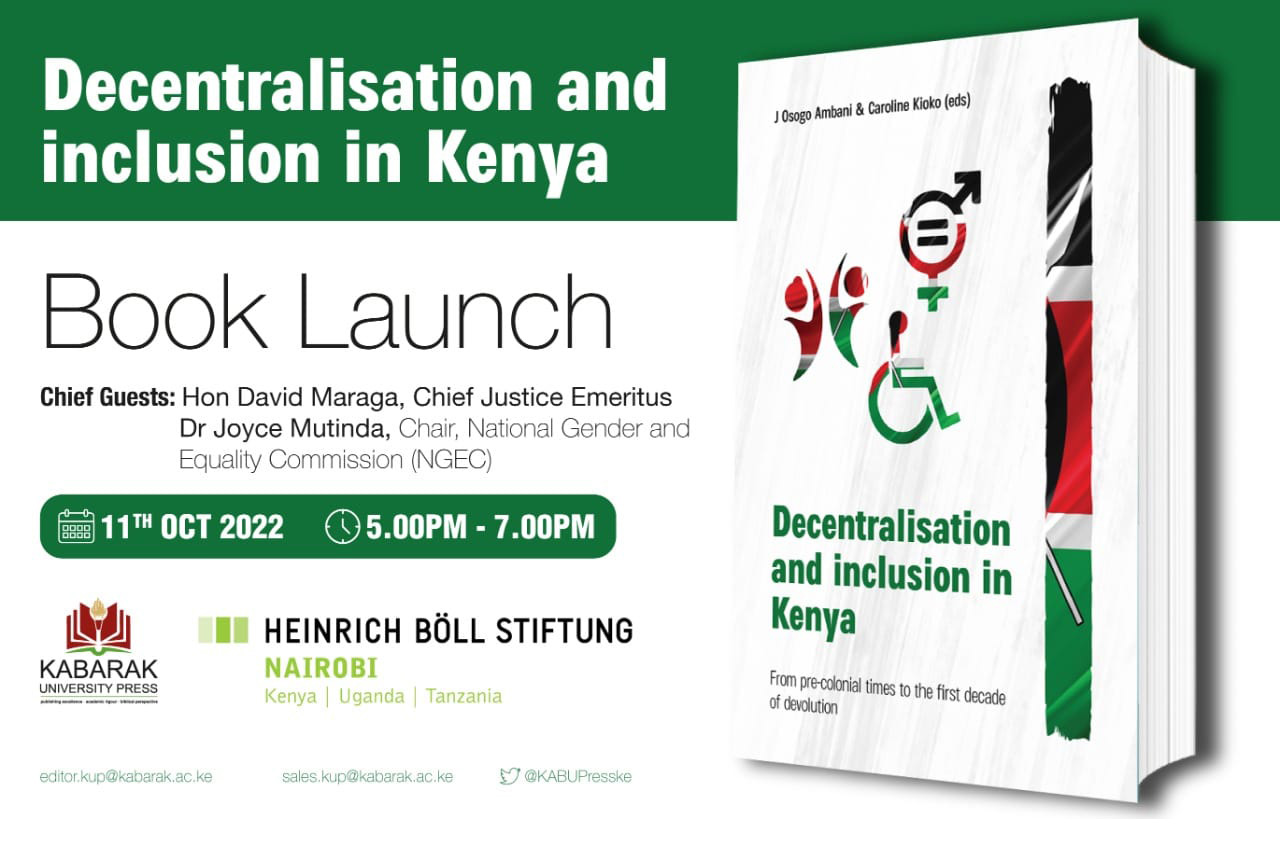 The book is founded on research that was carried out in 2021 by faculty and students of Kabarak University School of Law in conjunction with Heinrich Böll Stiftung on the effects of devolution on marginalised groups that is; women, the youth, ethnic minorities and persons with disabilities in five counties namely; Kakamega, Garissa, Nakuru, Narok and Kakamega. Moreover, the book traces the evolution of decentralisation and inclusion in Kenya through; pre-colonial times, colonial times and post-colonial times.

Dr Joyce Mutinda and Dr Wambua Kituku lauded Kabarak University for the research and publication of the book.  Dr Wambua Kituku congratulated the Kabarak Law School under the leadership of Prof J Osogo Ambani for their continuous efforts in providing and promoting excellent legal education in Kenya and hinted at publishing with the Kabarak University Press soon. Dr Joyce Mutinda on the other hand, recognised and appreciated the significance of any research in providing solutions to societal problems, she acknowledged just how impactful the research carried out will be towards dealing with inclusion, especially women’s inclusion.

The Chief Justice Emeritus, David Maraga was proud to be associated with Kabarak University. He  appreciated the fact that Kabarak University trains professionals who reflect Christian virtues and that through the Kabarak Law School’s Strategic Plan, it is evident that its legal education is founded on a Biblical Perspective. The Chief Justice Emeritus then went further to look at the history of marginalisation in Kenya, the great abilities that marginalised groups possess especially towards leadership, the role of devolution towards marginalisation, the relationship between decentralisation and inclusion and the role of the new Constitution 2010 towards inclusion and decentralisation. However, he was also quick to mention the need to look into the needs of the boychild whom he considered  an ‘endangered species’.

The book launch would not have been successful if not for the efforts of various stakeholders and Kabarak University appreciates every effort towards the same. Additionally, we congratulate the authors and research team that ensured the publication of such a timely and significant publication and as the Vice Chancellor rightly concluded; it is only after we decentralise that we move towards inclusion of all Kenyans.